l am a painter inspired by the energy of the seas. I love to bring positive energy indoors though my artwork.

Escape to the coast through an original piece of art.

On this website you can find my latest works, which are sent directly from my studio in Teignmouth to your home.

These include my original oil paintings from my seascape and wave, abstract and cloud series, as well as giclee fine art prints in various sizes and also A4 photos taken mostly around my home town of Teignmouth on the Jurassic coastline of Devon.

Studying film and video art at the University of Plymouth has impacted on the way I paint. I like to include a sense of movement in my work and a sense of escapism. I want the viewer to feel they can walk across the sand or dive into a turquoise sea.

My seascape and wave series looks at the light coming through the waves and refracted light bouncing off the sea.

The second series of paintings is more abstract and looks at the play of light on water. It is a more tranquil and peaceful contrast to the first energizing wave series. It examines shallow turquoise and emerald seas.  I am intrigued the patterns created when sunlight hits the shallow water creating a dance of light and shadow with blue, turquoise, green and indigo ripples.

The third series is an atmospheric cloud series of original oil paintings inspired by the wide open skies of the South West of England. I find looking up is often a calming experience. It strikes me that in stressful times we can all take inspiration from the sky above. It is an ever moving and changing element in all our lives. It reminds us that nothing stays the same.

My first two series have been inspired by the changing colours of the sea but also childhood memories of holidays to the Mediterranean and annual visits to Torquay (before the M5 was built). These emerald and turquoise waters, have all had an influence on what I wanted to paint. Having moved permanently to Devon 15 years ago the coastline and seas around Devon and Cornwall still inspire my work.

My paintings are oil on canvas as I prefer to work with this medium for its adaptability. In my work I aim to incorporate a process of change and development. For instance saturated elements are left to dry on the canvas changing over time. Only after a period of waiting the eventual image can be resolved. I apply glazes to further enrich the surface of the work. It is important to me to revisiting a painting several times until I am completely satisfied with the texture and depth of colour in the finished painting.

I graduated with a BA (Hons) in Fine Art in 2008 at the University of Plymouth. I have exhibited my paintings throughout Devon and gained an award at the Exeter Short Film festival. My films and photographs have been exhibited on the South Bank, London and in Italy. I have recently been given the status of a Geopark Ambassador Artist for the English Riviera UNESCO Global Geopark. 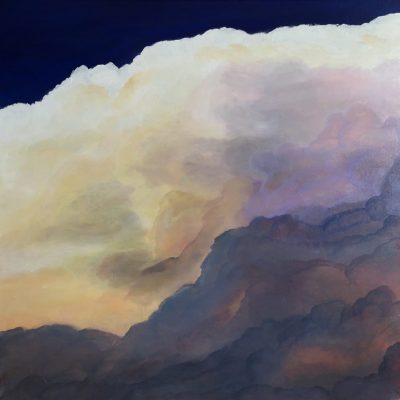 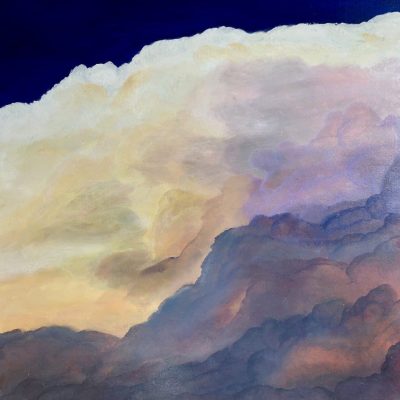 Into the blue ocean waves II