Ocean Waves III is inspired by the sunsets on the coastline of South Devon and Cornwall.  It shows a large waves cresting,  lit by a fading sun turning the waves a vivid emerald green. The time of day is key here. It is very late afternoon, the light is fading fast. The highlights become a mixture of deep greens and blues contrasting with the deep blue of the sea.

I like to work in oils because of their versatility. You can layer the paint so that it has a translucency. It is so robust a medium I can scrape the paint back or scratch into it too. This is another in my series of wave paintings which I started 5 years ago and numbering 50.

There are many reasons I like to work in oils. Firstly, because of their versatility. Secondly, I can layer the paint so that it has a translucency. Finally, it is such robust a medium I can scrape the paint back or scratch into it too.

Graduating with a BA (Hons) in Fine Art in 2008 from the University of Plymouth, I have exhibited my paintings throughout Devon and gained an award at the Exeter Short Film festival. I have exhibited my films and photographs at the South Bank Centre, London and in Italy.

Being a Teignmouth based artist I am a member of the Devon Artist Network and have recently been given the status of Art Ambassador for the Torbay UNESCO geopark.

I have exhibited my paintings throughout Devon and gained an award at the Exeter Short Film festival. My films and photographs have been exhibited on the South Bank, London and in Italy. I was interviewed on BBC Radio Devon in September 2019. There are no reviews yet.

Be the first to review “Ocean Waves III” Cancel reply

Shoreline original seascape oil painting on canvas board. Width 12 x 16 inches. Signed. Framed in a white wooden frame. With a certificate of authenticity. Free UK Shipping. Shoreline is inspired the beaches of Cornwall and North Devon. Some of … Read More 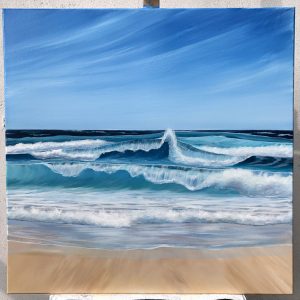 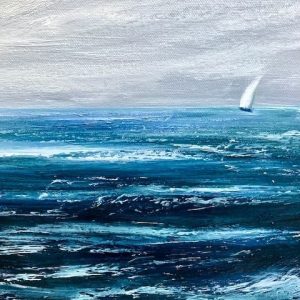 Racing out at sea seascape oil painting on canvas